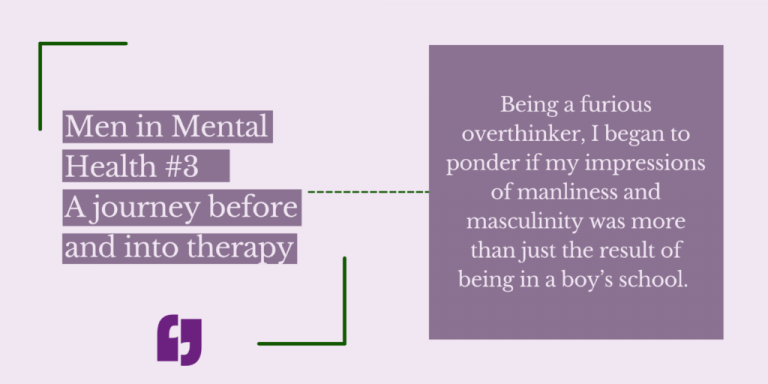 Men in Mental Health #2: A journey before and into therapy

The writer has been exhibiting symptoms of major depressive disorder since he was a child. He has been to multiple counsellors over different issues before settling for the one at CaperSpring.

Coming to terms that I needed help was puzzling to say the least. For a long time, I believed that being mentally ill would mean that I was abnormal. I thought that people who were “mental” had something inherently wrong. Suffice to say, my own stigma against mental illnesses stemmed from naivety during my childhood.

We form our core beliefs at a very young age and these are influenced by the environment we grew up in. There were times from my childhood where the terms “crazy” and “mental” were used in a derogatory manner and I would understand them at face value.

As I grew into adolescence, it did not feel right for me to express my emotions. I went to a boys school and like many of my peers I did not think it was manly to do so. This mindset followed me into adulthood, unfortunately, and it began to hurt because it was a personal vendetta against myself.

Being a furious overthinker, I began to ponder if my impressions of manliness and masculinity was more than just the result of being in a boy’s school. (This was sparked after I watched the series Bojack Horseman which I highly recommend) I hope this article has not bored you as I am about to journey into a wild thought experiment into my past.

In colloquial terms, my parents were part of the 忍 generation (translation: the generation that endures). With my father being the sole breadwinner and my mother being the housewife, we were your traditional nuclear family.

Providing the means to get by has always been their primary priority. Think about Maslow’s Hierarchy of Needs – In the theory, the five categories of human needs that dictate an individual’s behavior are presented in a pyramid shape, with basic needs at the bottom and less materialistic, intangible needs at the top. One can only move to addressing these less superficial needs when the primary needs are fulfilled. Needless to say, one could only think about emotional and psychological needs after securing the basic physiological needs.

I believe that the term ‘忍 generation’ is not one that was termed so casually – I genuinely acknowledge that my parents worked hard and endured toughship during their younger days so that my sisters and I did not go through the same.

For most in the present, “getting by” includes completing their education up to a tertiary level, securing a job and raising a family with their own housing. Although the priorities were albeit the same for my parents, the stakes at play were much larger. My father chose to dive straight into employment after completing his studies in polytechnic instead of furthering his studies because he had to provide for his family.

Most of us these days have the luxury of never needing to face this conundrum because our parents worked hard to prevent it from ever crossing our mind.

Simply put, the burdens we face today are not the same as the ones faced by the previous generation. If you did not know already, they are known as first-world problems. (Look it up on Urban Dictionary)

Besides giving up the opportunity to be a conventional success story (because going to university was a really big deal then), it goes without saying that despite having albeit the same priorities, my parents and I were brought up in different environments. Having two sisters meant that my Dad was not only the closest but also the only masculine figure I had growing up. Dad possessed some stoic traits: he did not complain easily nor was he expressive with his emotions.

Although I am not sure exactly when, the phrase 男人流血不流泪 (translation: a man sheds blood but not tears) popped up somewhere in my childhood and it kind of stuck with me ever since. Perhaps a part of me also thought that appearing cold was the manly thing to do. I therefore grew up thinking it was less manly if I was overt with how I felt. Bottling up your feelings never ends up well, does it?

It took me a while to realise that by bottling up my feelings, I was repressing my fear of being vulnerable. A fear of vulnerability is ultimately a fear of rejection and abandonment. Perhaps I never grew out of an emotional fragility that embraced my childhood. Perhaps I had too high expectations to be loved that any signs of apathy was a direct hit to me.

If your takeaway from the previous paragraphs is that we are who we are because of the past, please know that you have misunderstood me. The message that I am trying to convey is that I am not controlled by my past. Everywhere that I was, I thought that bottling it up was the right and manly thing to do because of the signals fellow males were giving to me. Unfortunately, men persist to be emotionless because it is still widely considered to be the masculine thing to do.

It feels endless sometimes but I believe that during my counselling sessions at CaperSpring I can untie these tight knots from my past. It was never a smooth sailing ship, but my counsellor and I share a strong alliance where I have placed my trust in her because of the time and emotions she has invested in me.

I was fearful in the beginning and I would sometimes question myself if I should turn up. I really wanted to, but I could not fully comprehend that counselling is a safe space solely for me. Except that it was but I was just not used to it.

PrevPrevious
Back To Blog