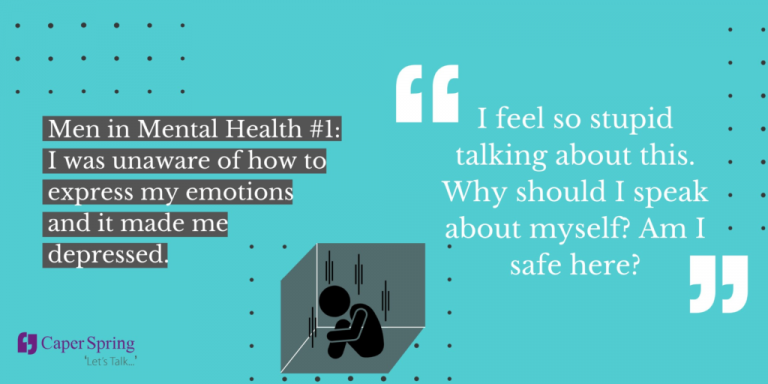 Men in Mental Health #1: I was unaware of how to express my emotions and it made me depressed.

Men in Mental Health #1: I was unaware of how to express my emotions and it made me depressed.

The writer has been exhibiting symptoms of major depressive disorder since he was a child. He has been to multiple counsellors over different issues before settling for the one at CaperSpring.

For the larger part of my life, it felt normal to not be expressive. Since I was a child, I expressed my emotions so rarely that even as I entered adulthood, it still felt embarrassing. It felt weird to put myself out there and I was content about not wanting to talk about myself. Eventually, I grew to become really passive in social situations.

This passivity, however, began to manifest itself in me in a self-sabotaging manner. I would fake my words so that people would not know what was on my mind. I began to feel it was unnecessary to express myself. It felt like a piece of myself was being taken away each time I did and I had a fear that someday that person would use that against me.

“Why do I have feelings? I just can’t stand them, they make me feel so weak.”

I gradually grew to dislike my thoughts and feelings. My self-loathe came from a place of suppression because I rarely felt safe enough to open up.

I don’t want to talk about my feelings. I hate them! Why does it come so naturally to other people when it makes me feel like curling up in a corner?

It felt normal to shield myself from the world because they did not deserve to know. Bottling your feelings up never ends well, does it?

What I have to point out is that as I experienced all of this, it was hard for me to realise that my behavior was unhealthy. According to Daniel Kahneman, we have two selves: the experiencing self and the remembering self. He went on to elaborate in his TED talk that the experiencing self knows only of the present moment while the remembering self is obscured in memory or imagination.

What this means is that while I am able to recall that I was suppressing my emotions, I was so caught up in those moments that I could not realise it was unhealthy for me. I went through what I described in the above paragraphs in my experiencing self. I was feeling horrible because I could not give myself a break. It took me a while that this was the result of suppressing my emotions.

Self-deprecating thoughts were a daily occurrence in my head and I made the decision to attend counselling. There was a lot of consideration and hesitation involved, however.

I actually felt a little skeptical after the first few sessions.

“I feel so stupid talking about this. Why should I speak about myself? Am I safe here?”

I often felt like I did not want to divulge too much during my counselling sessions. It took me a while to realise that it was fear that held me back – the same fear that had been so prevalent in my life it almost felt uncomfortable to try to overcome it.

But I persisted because I was tired of not being in control of my emotions. One thing that my counsellor at CaperSpring does very distinctly is that she separates my negative emotions from me.

We projected some painful experiences together (the self-deprecating thoughts that I loved avoiding) and put them on the stand. We also visited memories from my childhood that are still vivid and explore how they could have possibly made me so indifferent.

It is no mean feat to come this far in therapy because many do not feel safe enough to open up fully despite being given a safe space in counselling. A safe space is an environment where one should be confident that of not being exposed to any emotional harm.

My counsellor helped me realise that I could only begin to tackle these uncomfortable emotions if I recognised them and therapy was the place to bring them to salience. At the present day, I am still going for counselling. There are still some inhibitions that are making it extremely difficult for me to fully grasp the concept of a safe space. The many years of feeling unsafe to open up has made its mark on me.

Are you having trouble with difficult emotions? We can help. Reach out to us here.

Stay tuned for part 2 of the writer’s story!

NextNext
Back To Blog